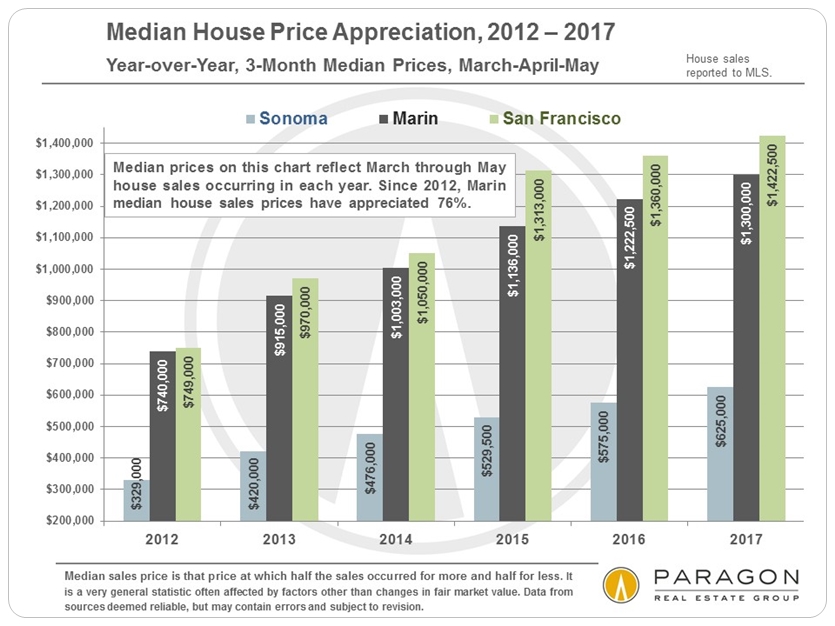 This chart below compares median house sales prices since 2012 for March through May sales, year-over-year, for Marin, San Francisco and Sonoma Counties. Marin median prices are illustrated by the dark gray columns. Like Marin, most Bay Area Counties hit new peaks in median sales prices this spring, often by significant margins. 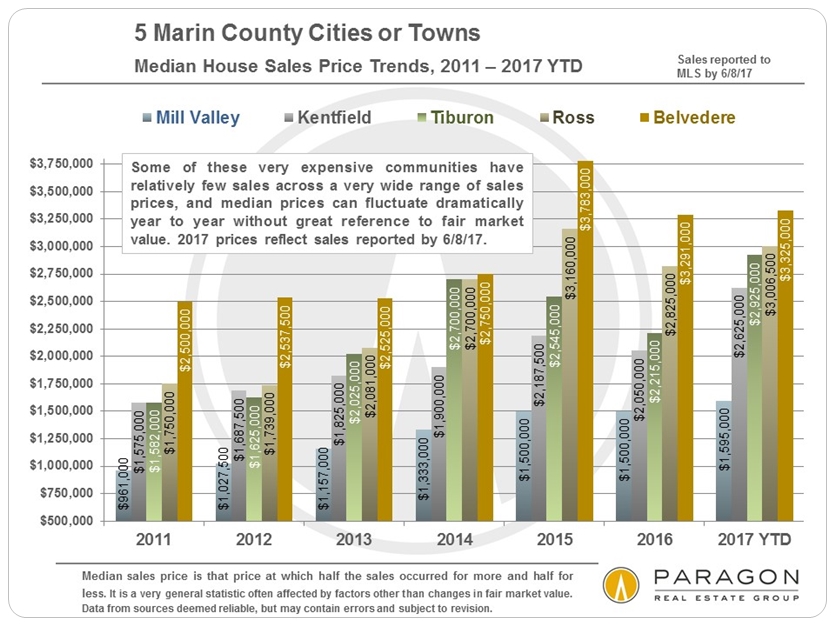 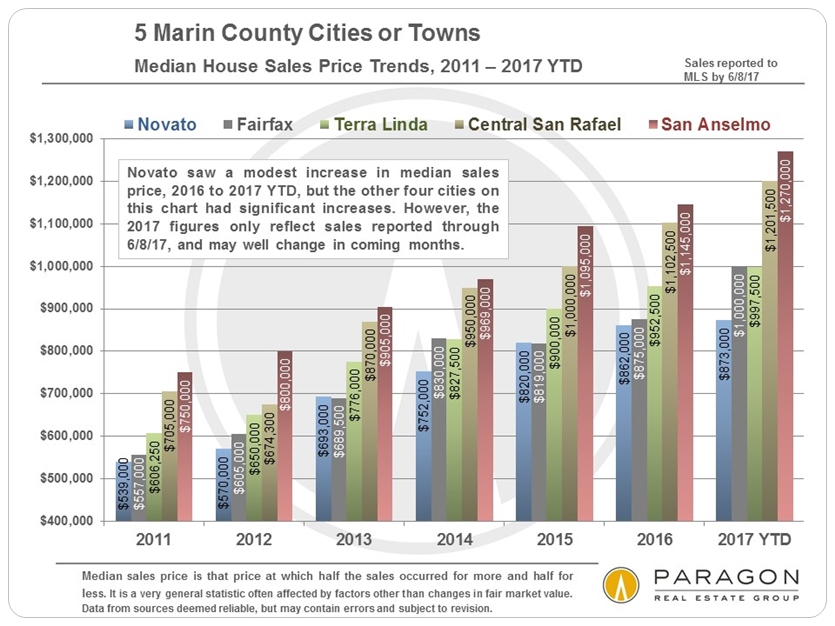 The two charts above take a look at year-to-date 2017 median sales prices as compared to the previous 6 years, for 10 Marin communities. There has been consistent overall annual home price appreciation continuing into the present year. However, median sales prices sometimes peak for the year during the feverish spring market, so final prices for all of 2017 may be lower in some cities and towns than what is showing year to date.

And the below chart graphs median condo sales price appreciation since 2011. 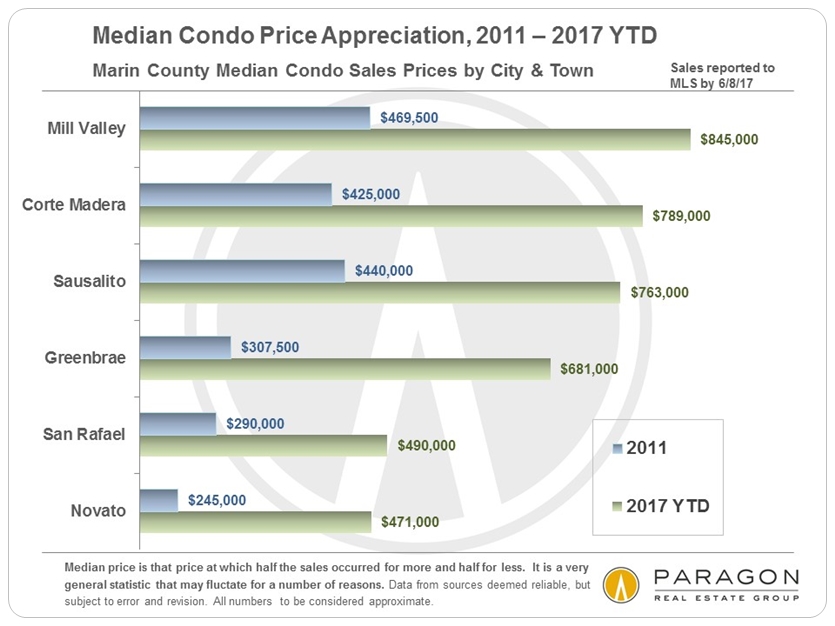 Comparing Us and Them 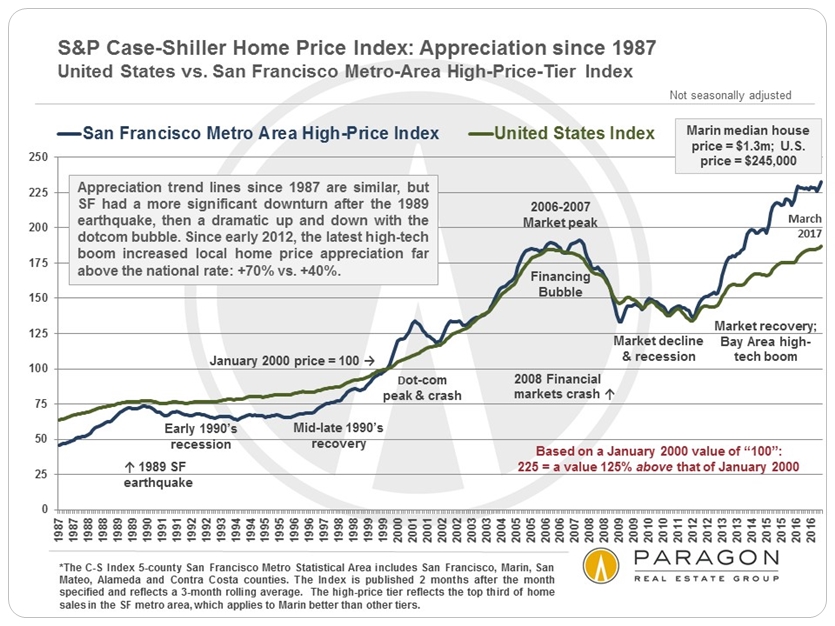 This chart compares the S&P Case-Shiller Home Price Indices for the 5-county San Francisco Metro Area high-price-tier market (which reflects the Marin and city of San Francisco markets best) in the blue line and the United States market in the green line. It goes through March 2017, the last report Case-Shiller has released as of early June, so it will not reflect the appreciation of April and May.

The national and Bay Area appreciation trend lines are similar except for 3 periods: Right after the 1989 earthquake, the rise and fall of the dotcom bubble, and the recent high-tech boom in the Bay Area. Looking beyond the difference in appreciation rates since 2012, 70% vs. 40%, the difference in dollar appreciation in median house prices over the 5 years is enormous: over $550,000 for Marin vs. $70,000 for the U.S.

The number of homes sold in Marin for $2 million and above (red line) hit a new monthly high in May, while the number of active listings (blue columns) was a little below the peak hit in May 2016. This chart also illustrates the seasonality of the luxury home market: Most active in spring and early autumn; slower in mid-summer and much, much slower mid-winter. 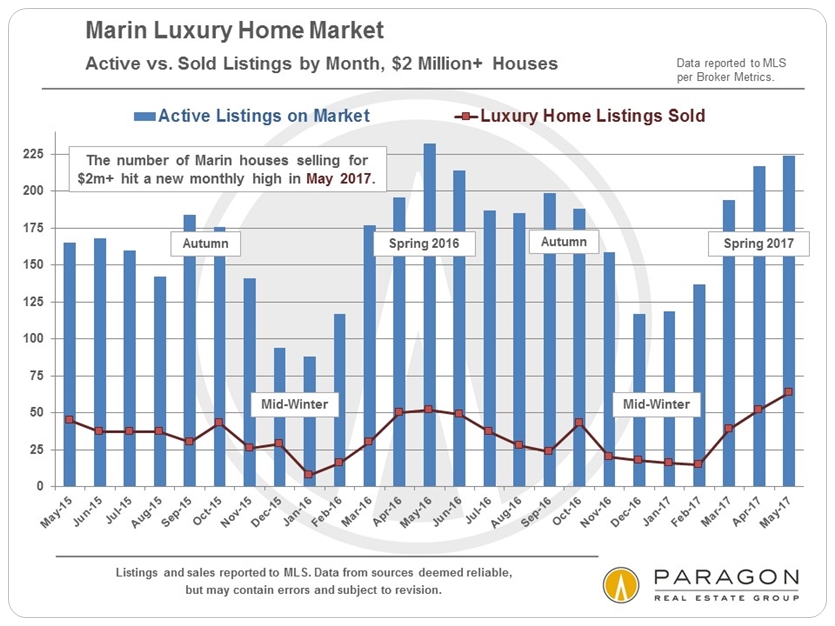 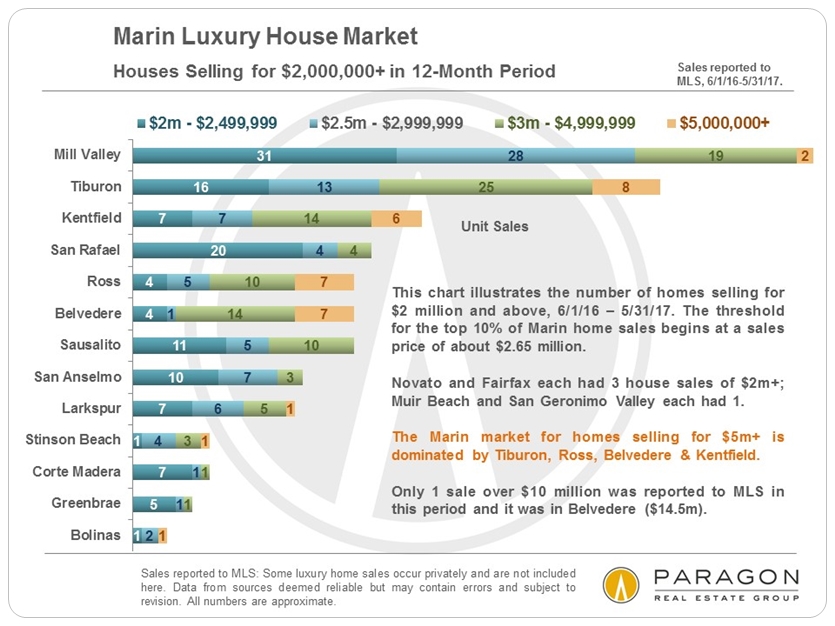 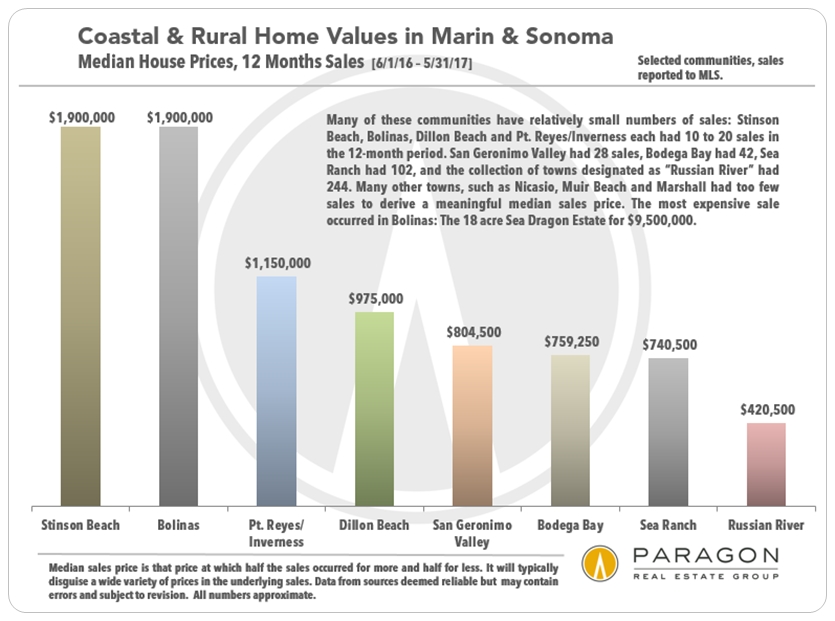 Stinson Beach and Bolinas had very high median sales prices in the past year, albeit for a relatively small number of sales. Russian River offers among the lowest home prices in the Bay Area.

In April and May of 2017, listings that sold without going through price reductions (blue columns), i.e. homes the market deemed appealing and well-priced, averaged a sales price 3 to 4% above asking price, signifying strong demand and, often, multiple bidding between buyers. Those listings that had to go through one or more price reductions before selling (green line) averaged a sales price 10% below original asking price. 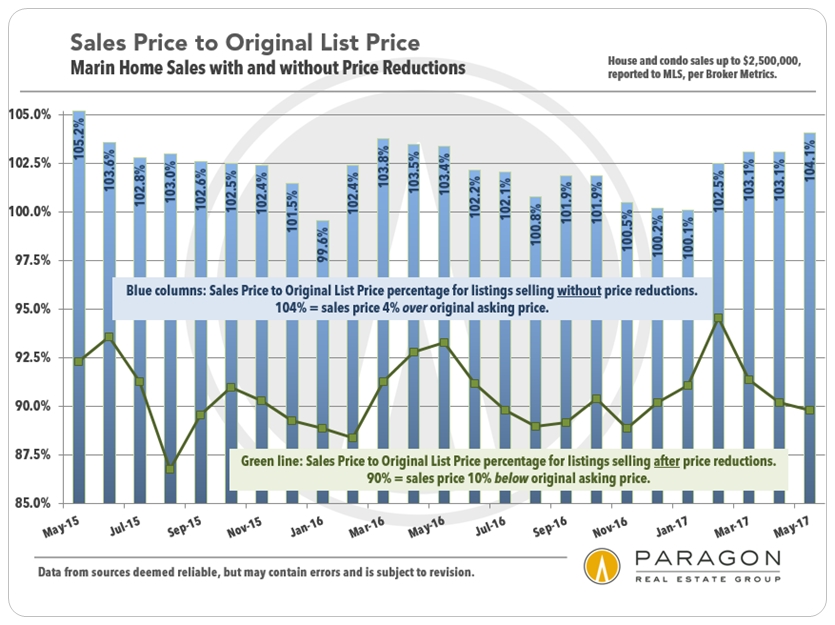 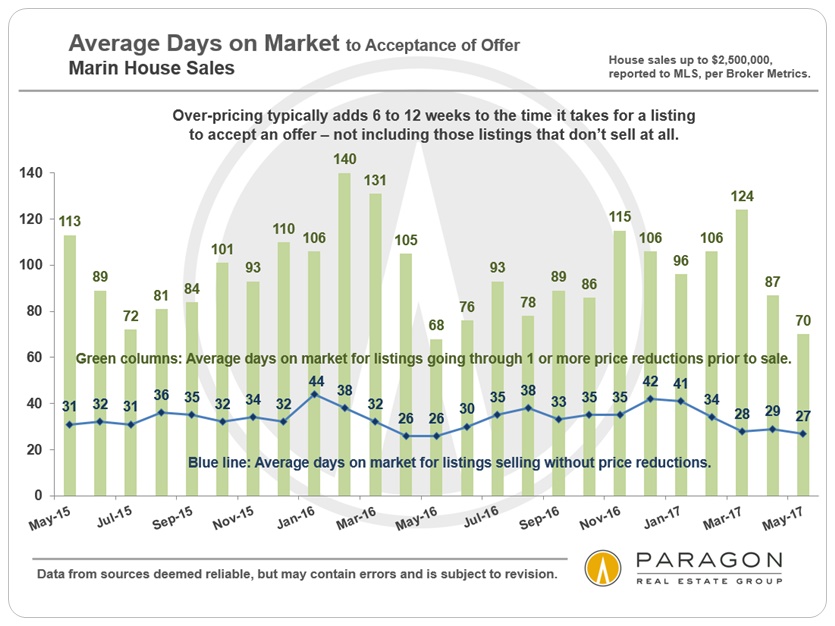 The two charts above not only illustrate the positive effects of preparing, pricing and marketing a home properly, and the negative effects of not doing one or more of the three, but also the ebb and flow of demand of the market during the different seasons. Typically, one sees the highest sales-price-to-list-price percentages and lowest days-on-market in spring, while mid-winter has statistics reflecting much lower demand.

It should be noted that in a changing market filled with relatively unique homes in a wide variety of different locations, pricing correctly can be a challenge. Whether seller or buyer, the only practical method to assess current fair market value, is to take an honest look at what has happened and is happening in the market with other comparable, or as comparable as possible, properties.

As of June 12, mortgage interest rates have continued their decline from the first of the year. Interest rates remaining so low by historical standards, and the fear that they may soon go up, is probably one of the factors behind the very hot markets seen around the Bay Area this spring. 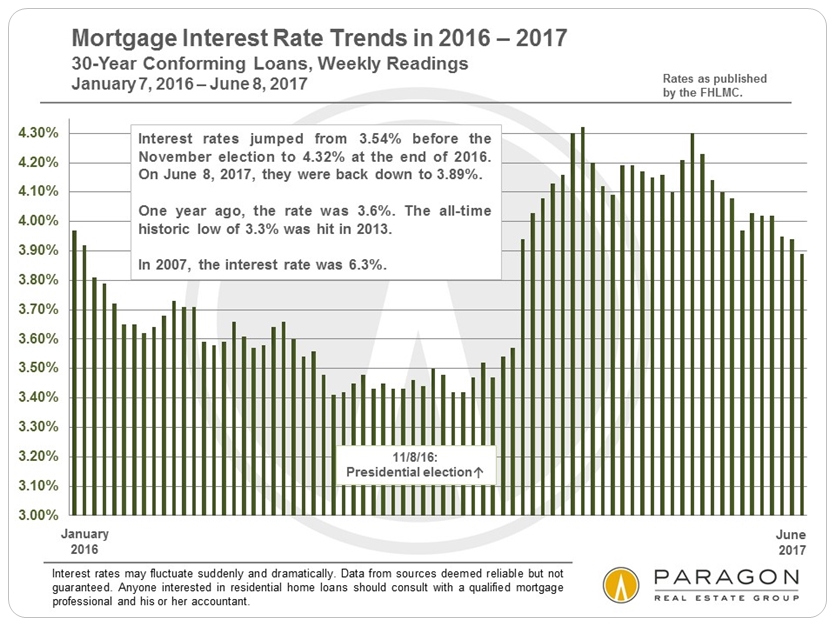 We have literally dozens of other analyses pertaining to the Marin homes market. All our Bay Area real estate reports can be found here: Paragon Market Reports

Please call or email if you have any questions, or would like further details on recent sales or homes currently on the market.