Marin County // The Luxury Home Market, Sales & Prices by City, and 6 Market-Heat Metrics
As illustrated above, the market for homes selling for $2 million and above has cooled somewhat over the past year, with the number of active listings climbing, the number of sales dropping, and a big jump in the quantity of listings expiring without selling. This is a general trend in markets around the Bay Area: Not a crash, but a softening of demand amid an increase in luxury homes for sale. 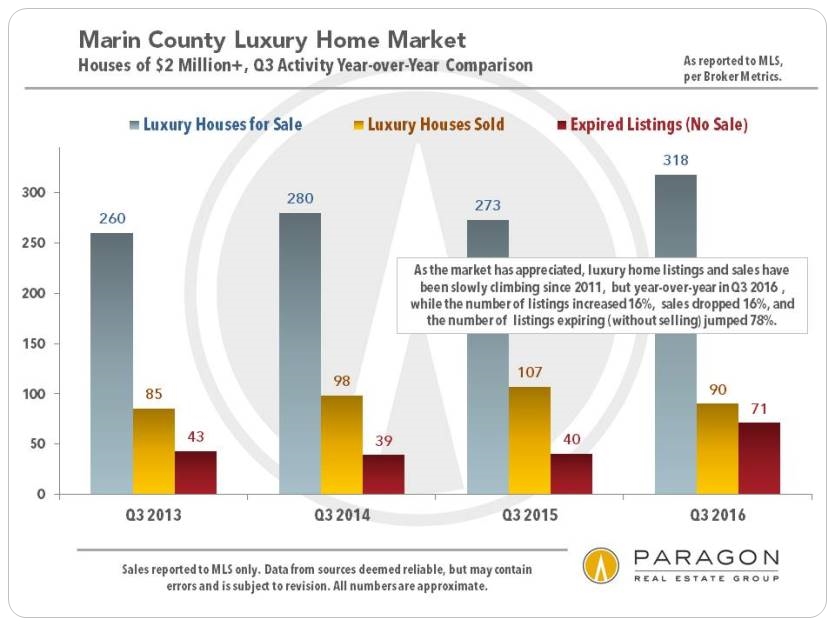 The large jump in listings expiring without selling suggests that many sellers are setting prices buyers are simply unwilling to pay. It will be interesting to see how the autumn selling season, which began after Labor Day, develops in this segment. Because of the gap between a new listing coming on market, an offer being accepted, and the sale actually closing, autumn sales data is just starting to trickle in now. 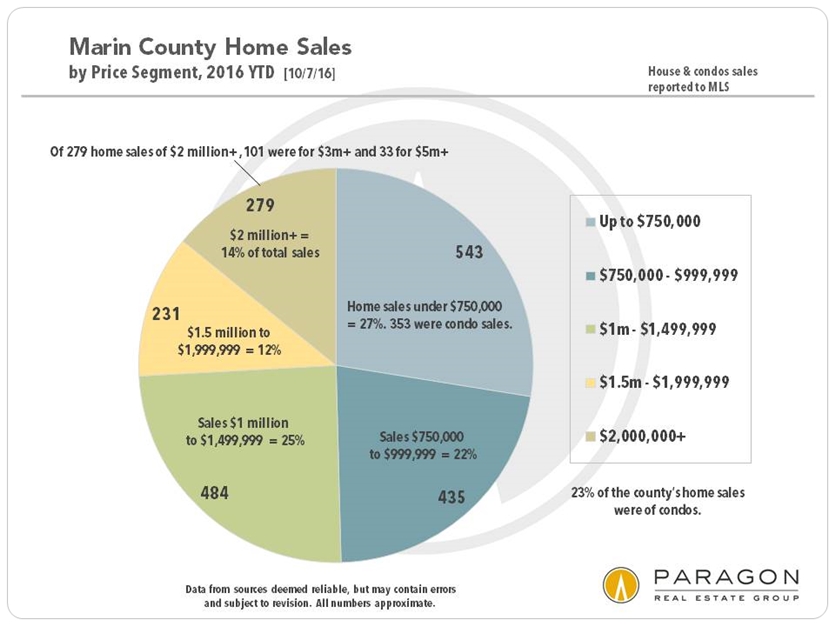 Novato, San Rafael and Mill Valley are by far the largest markets in Marin. 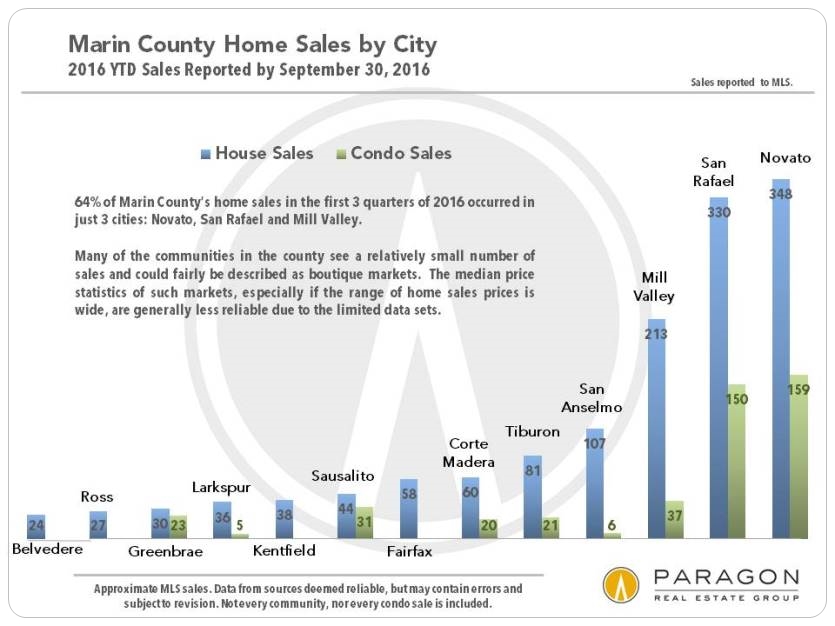 An interesting dynamic has recently been playing out in markets around the Bay Area. As home price appreciation has soared since 2011, the greatest pressure of buyer demand has been moving to cities and neighborhoods that are perceived as particularly good values in comparison to other markets nearby: not the wealthiest, but straightforward, comfortable, low-crime, family-friendly communities with more affordable housing options. This has occurred in San Francisco (where the Sunset District, surprisingly, is now the hottest market in the city), and San Mateo, and it is happening in Marin as well. Below, cities and towns are assessed by a variety of classic real estate statistics: By most measures, less expensive communities (or less expensive in comparison with adjoining markets) are experiencing the strongest buyer demand. Corte Madera and Greenbrae, next to the more expensive cities of Mill Valley, Tiburon, Larkspur and/or Kentfield, with easy access to 101, and within reasonable commuting times to San Francisco, are standouts. San Anselmo, next to Ross, the second most expensive town in Marin (after Belvedere), also has strong indicators. Novato and San Rafael, significantly more affordable still, but further from the city, are seeing the highest year-over-year appreciation rates. Generally speaking, most of the county markets remain strong by any normal standard. 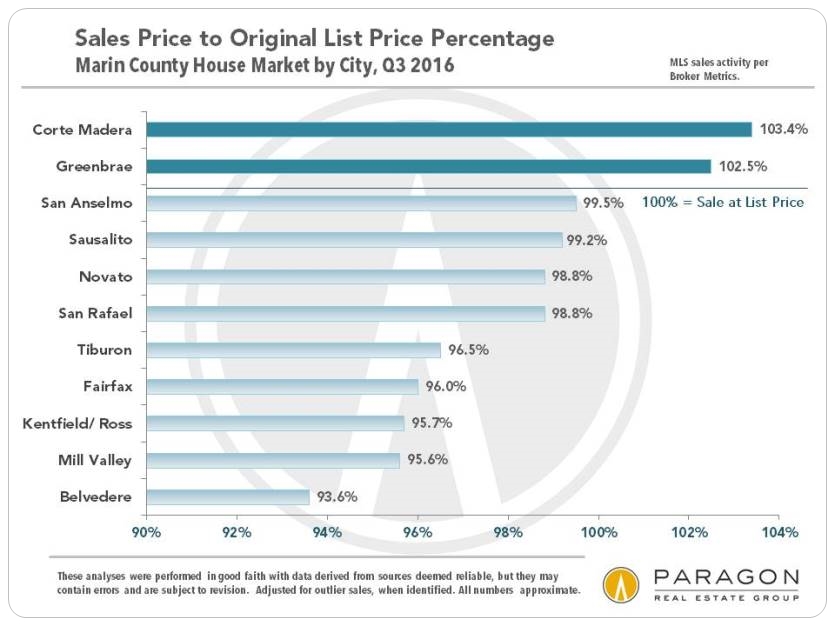 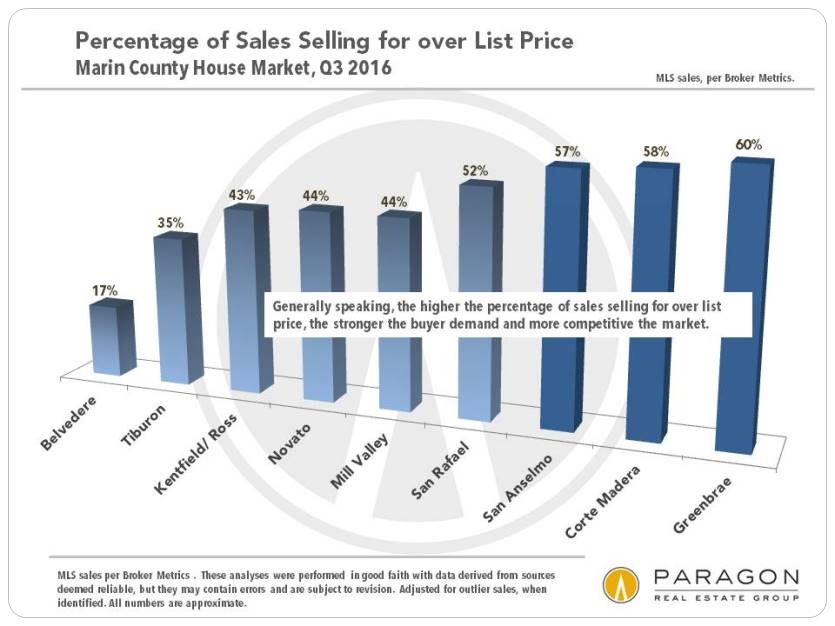 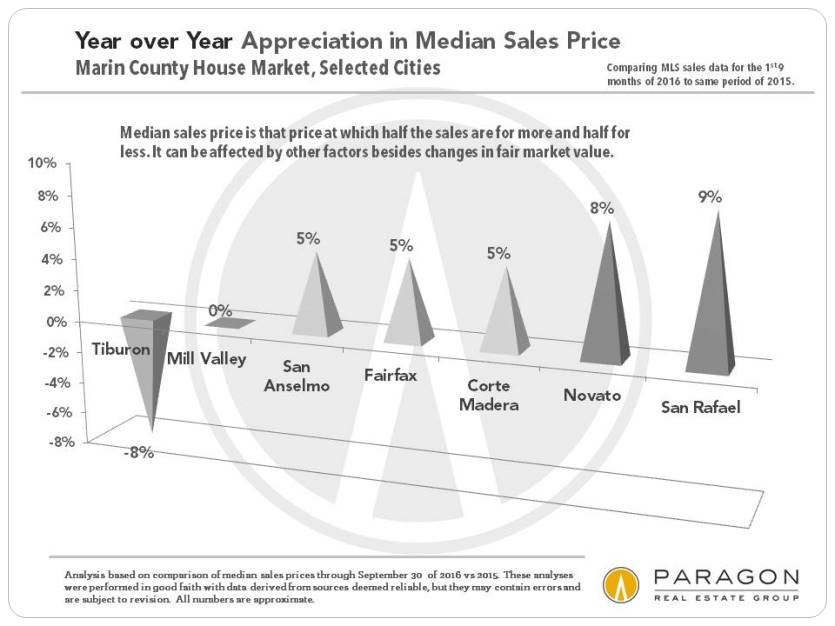 The five Marin cities and towns with the lowest median house sales prices are the ones that have seen the highest year-over-year appreciation rates. Again, this is now a common situation in other Bay Area counties as well. Note: Tiburon saw an abnormally huge 70% jump in median house sales price from 2011 to 2014, and then declines in 2015 and 2016. However, it is still up 40% over 2011. Sometimes median prices fluctuate for other reasons than changes in fair market value, not unusually simply a shift in the inventory of homes listed for sale. This is especially true in very expensive markets with relatively low numbers of sales, and where the ranges in home sales prices can be enormous. Marin has half a dozen such markets and they sometimes see big fluctuations, up and down, in median sales prices that have little to do with underlying market dynamics. However, as seen in the first chart in this report, the high-end house market has been experiencing a cooling in the past year.

Months Supply of Inventory: Buyer Demand vs. Supply of Listings for Sale

Much of Marin County is still in strong seller-market territory as measured by this metric. 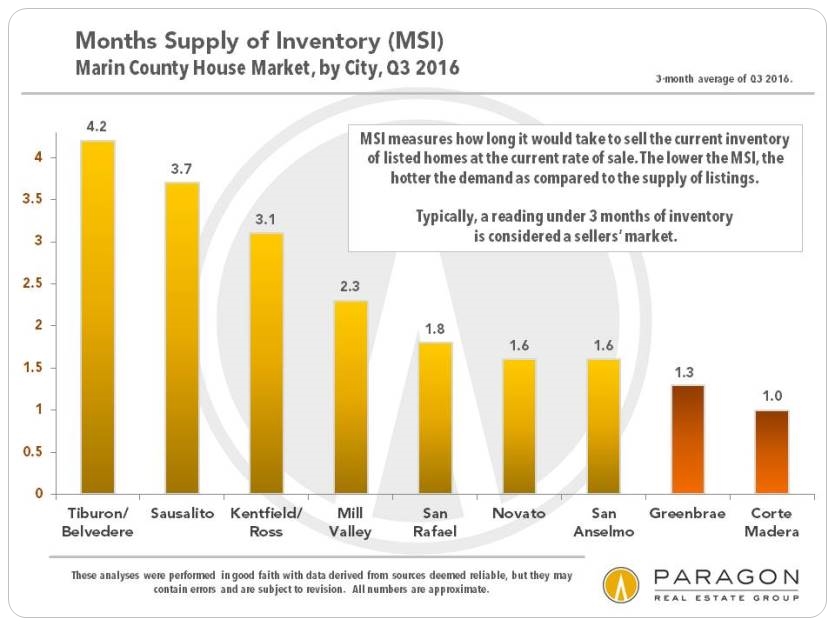 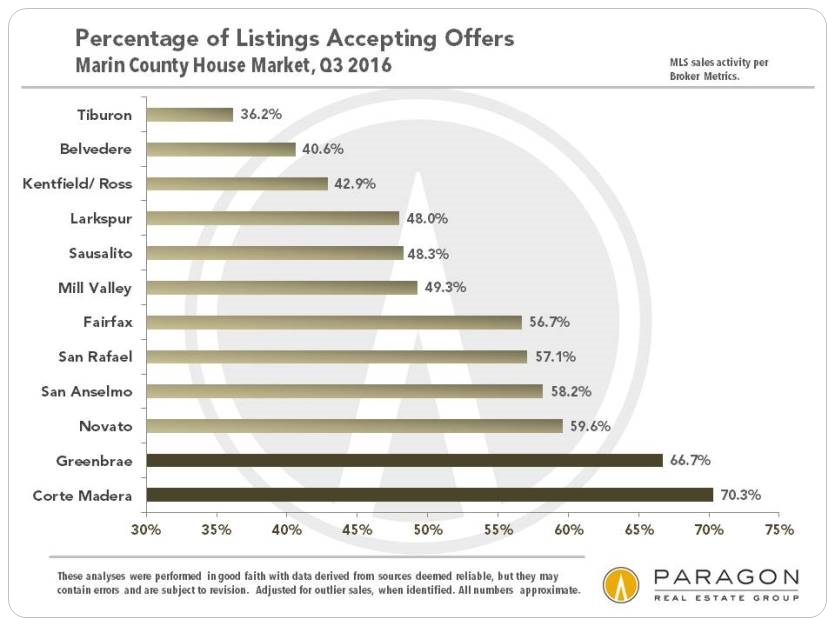 Again, Corte Madera and Greenbrae, followed by the 4 most affordable housing markets in the county, lead the way in market heat by this statistic. We have not included very small communities such as those on the coast or in western Marin in this report, though we have noted their median values on our Marin home-price map. Statistics are generalities that can sometime fluctuate without great meaningfulness, and any one statistic may be an anomalous outlier. Longer term trends are much more reliable than short-term ups and downs. These analyses were made in good faith with data from sources deemed reliable, but they may contain errors and are subject to revision. It is not our intent to convince you of a particular position, but to attempt to provide straightforward data and analysis, so you can make your own informed decisions.