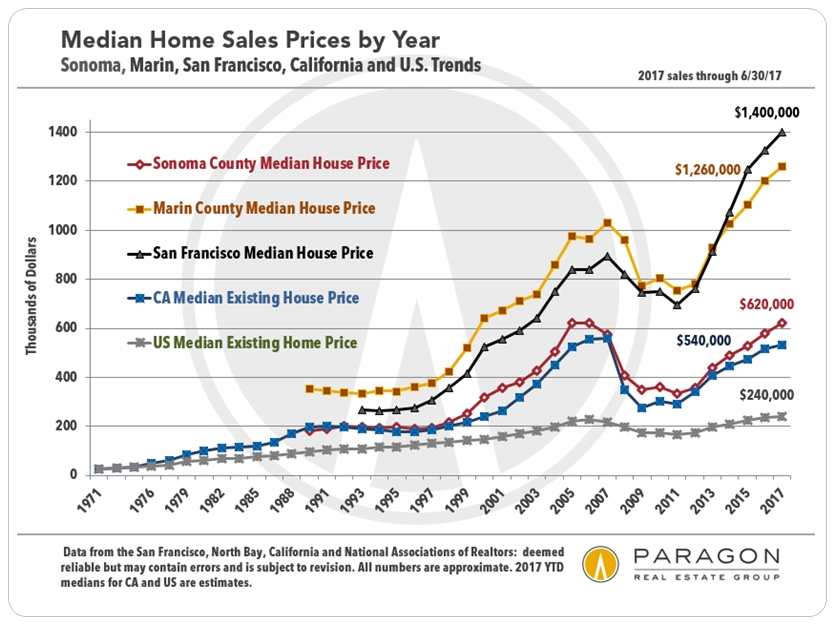 Spring and summer are two most active selling seasons in Sonoma, but a substantial amount of business will still occur before the market starts to enter its winter holiday hibernation in mid-November. So far, 2017 has seen significant home price appreciation virtually throughout the county. As illustrated in the first chart below, a big factor is its much greater affordability when compared to Marin and San Francisco. Of course, Sonoma is also simply a wonderful and beautiful place to live and still be within relatively easy driving distance of the city and its amenities.

Median sales prices are not perfect indicators of changes in values for specific homes: They can be and often are affected by factors other than changes in fair market value, and shorter-term anomalies are not uncommon. What is certainly true is that every part of Sonoma County has seen substantial appreciation since the market recovery began about 6 years ago. 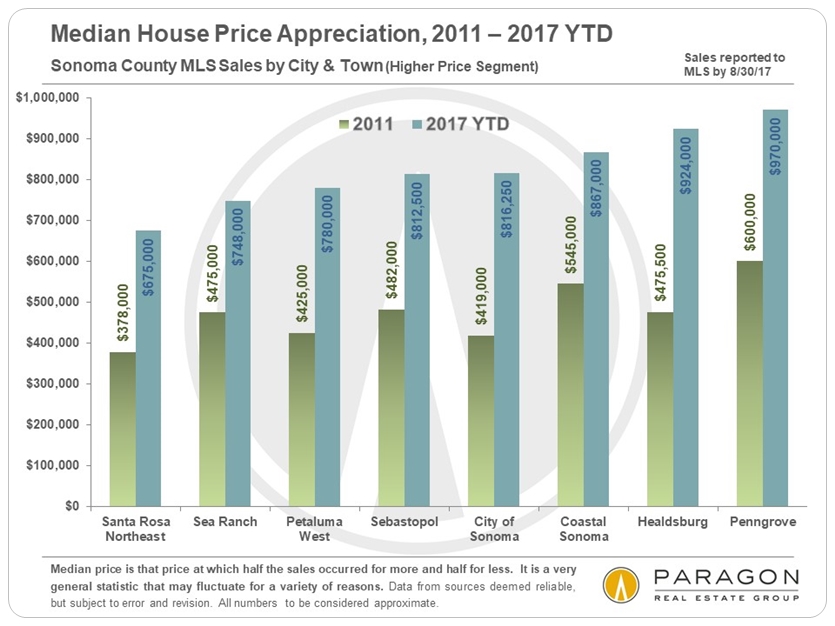 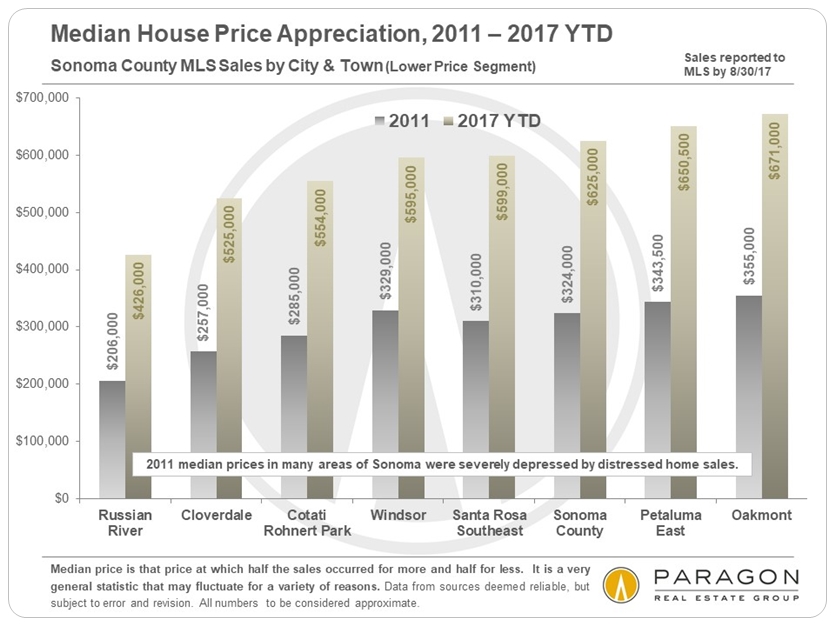 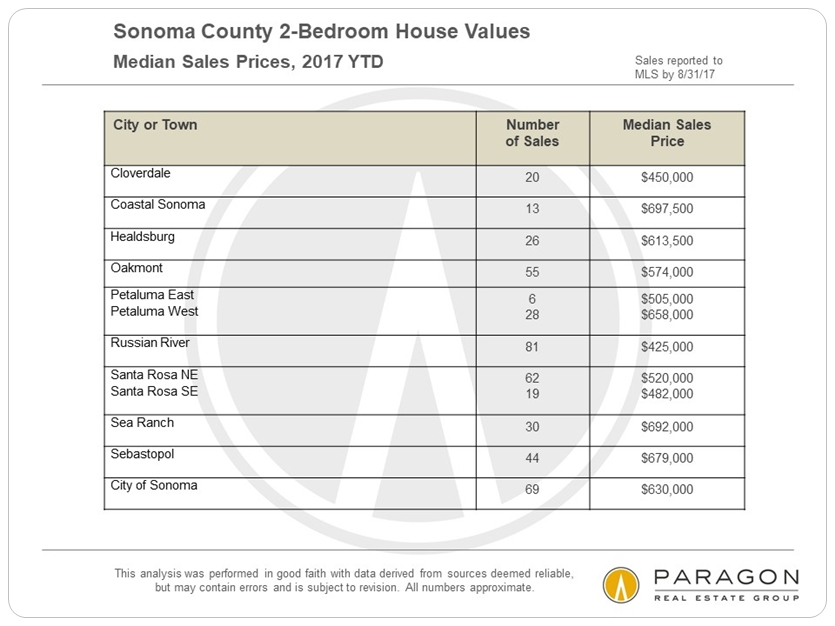 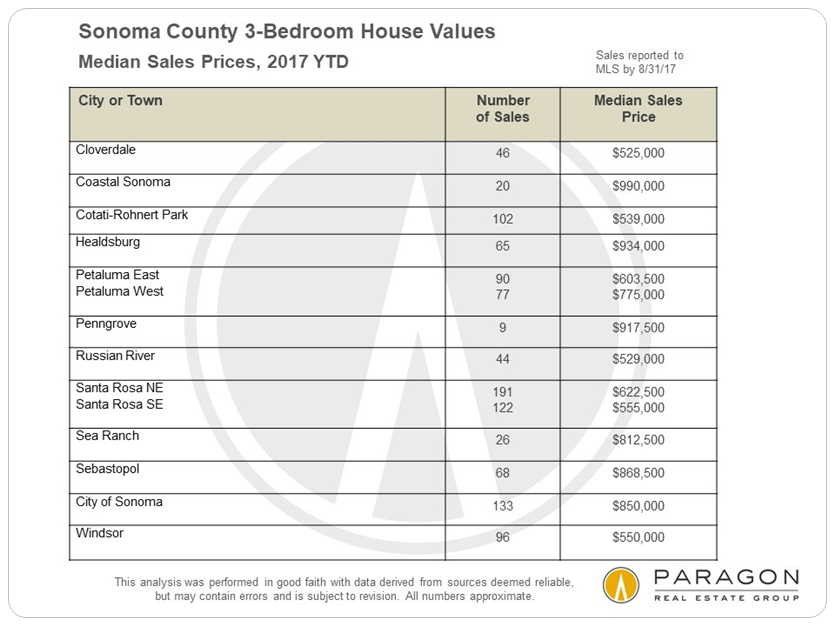 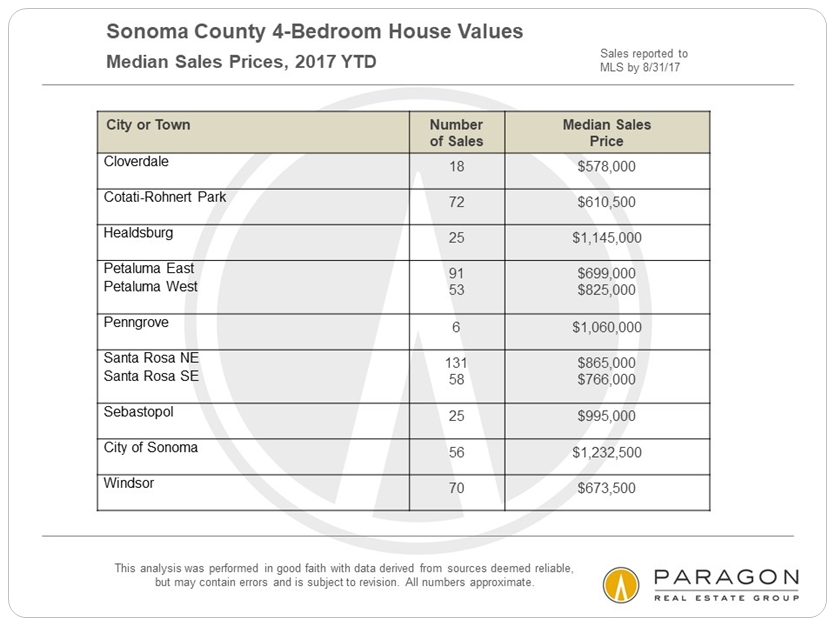 This next chart illustrates the ebb and flow of activity by season. September-October typically sees the last significant surge of new listings until the market picks up significantly again in February-March. 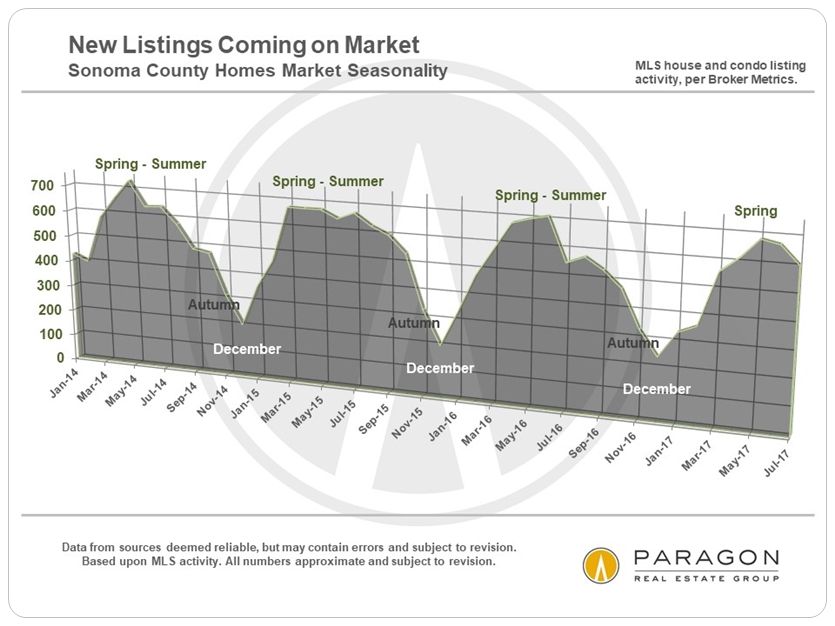 The lower the months supply of inventory, the higher the demand as compared to the supply of homes available to purchase, i.e. a lower MSI equals a hotter market. The entire Bay Area has been experiencing very, very low MSI figures – under 2 months of inventory – since the feverishly hot spring market began. 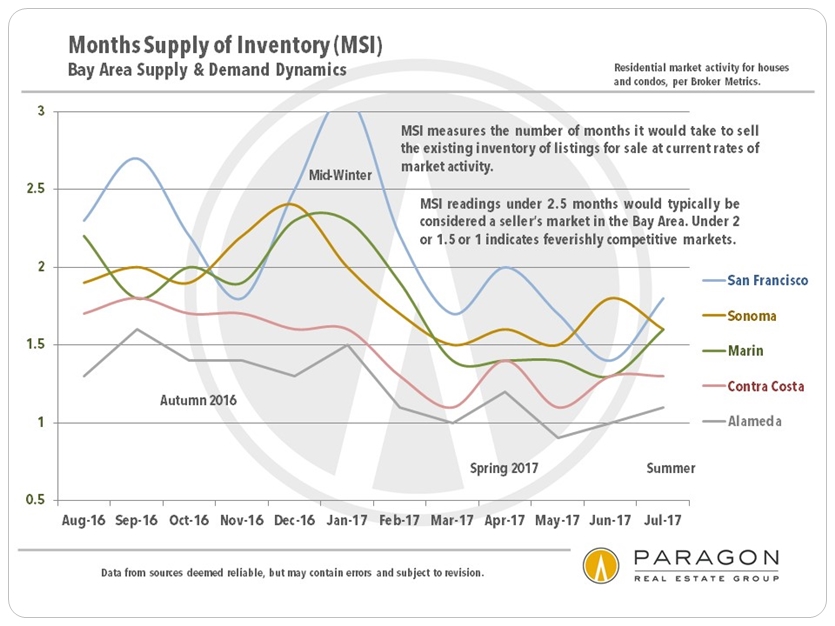 This next chart illustrates home affordability for selected metro areas across the country as calculated by the National Association of Realtors. The 7 Bay Area counties south of Sonoma, constituting the first 2 metro areas charted, are the least affordable in the nation. Among other ramifications, this is driving buyers to Sonoma, including first-time buyers, second-home buyers and people relocating from more expensive counties (i.e. selling in San Francisco, buying in Sonoma, pocketing the difference in prices, and living the good life). 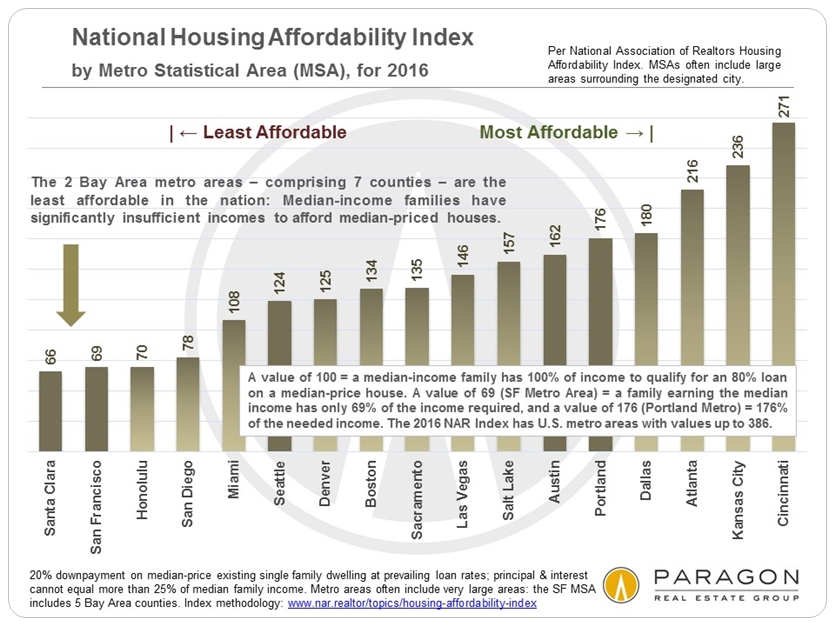 Since San Francisco is considered the big city in the Bay Area (though San Jose is actually larger), it seems counter-intuitive that its house market is one of the smallest (though it has the largest condo market in the Bay Area). The Marin house market is slightly smaller than in the city, and in Sonoma, it is twice as big as either. This plays a big role in supply and demand dynamics, and home prices. 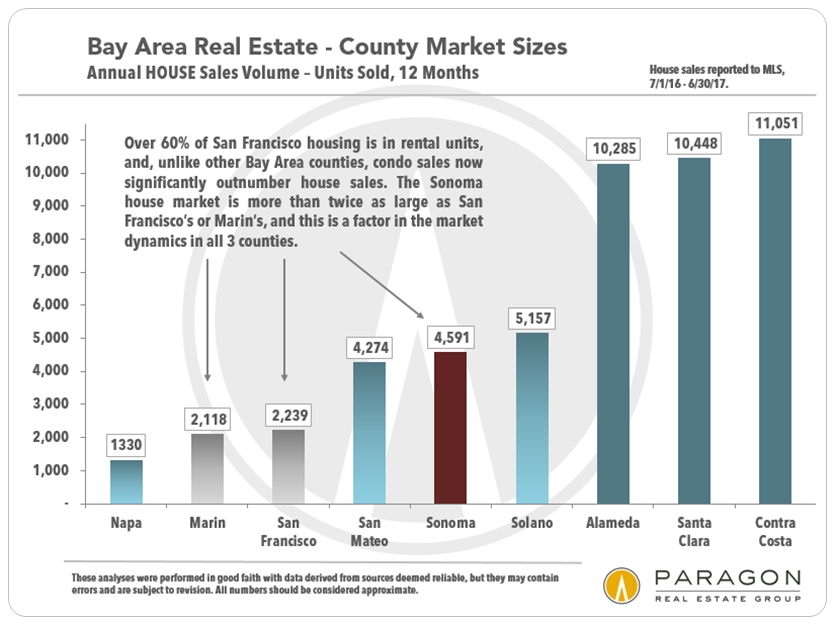 Since the election, interest rates have seen a wild ride, first up and then down. As of early September, rates hit their lowest point so far in 2017, a significant financial advantage for buyers. 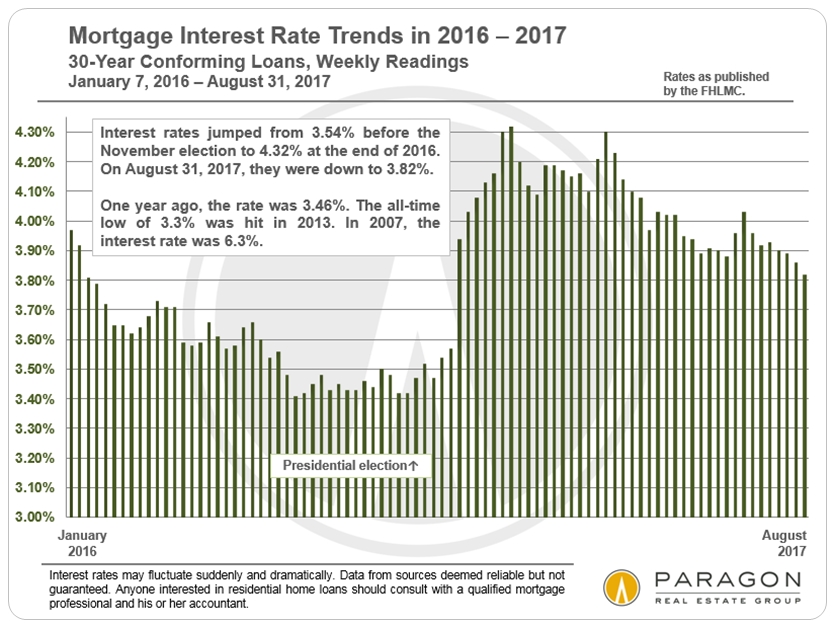 Please let us know if you have questions or we can be of assistance in any other way.

All our many Bay Area real estate analyses can be found here: Paragon Market Reports