Where to Look to Buy for the Price You Want to Pay The area market for houses under $1,000,000 is utterly dominated by 3 cities, while the condo market is dominated by Walnut Creek, most specifically its gated, active-senior, Rossmoor community. Moving into higher price ranges brings other cities into the picture, and in the luxury home market, $1.75 million and above, the cities of Alamo, Lafayette and Orinda become the sales leaders. 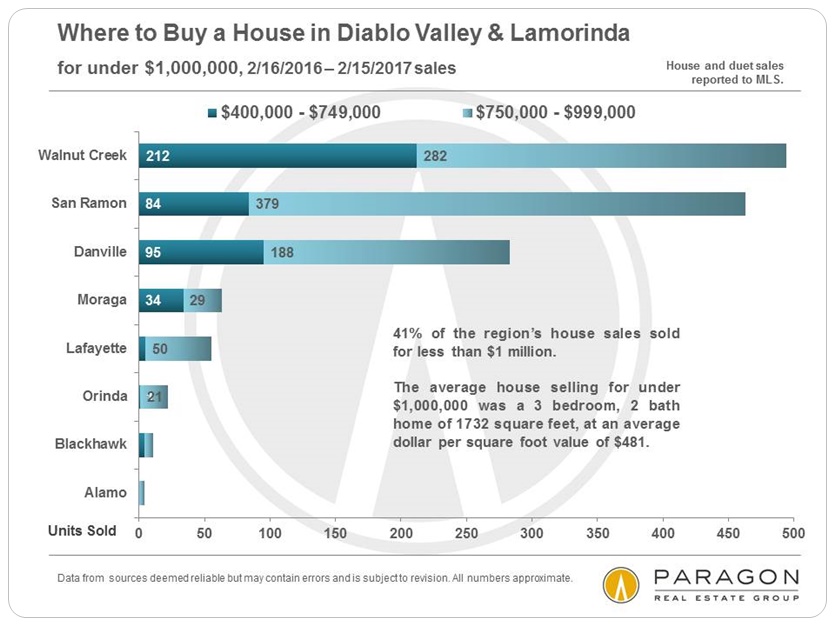 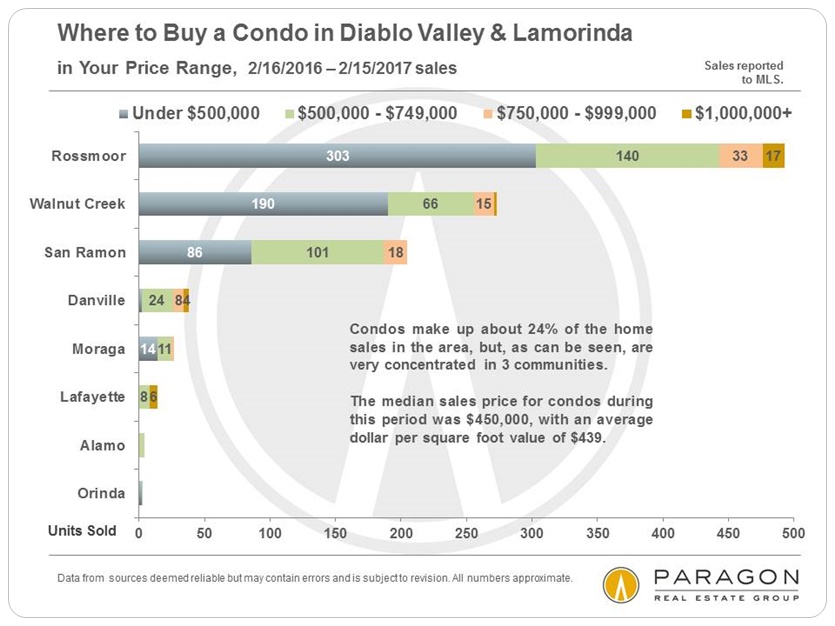 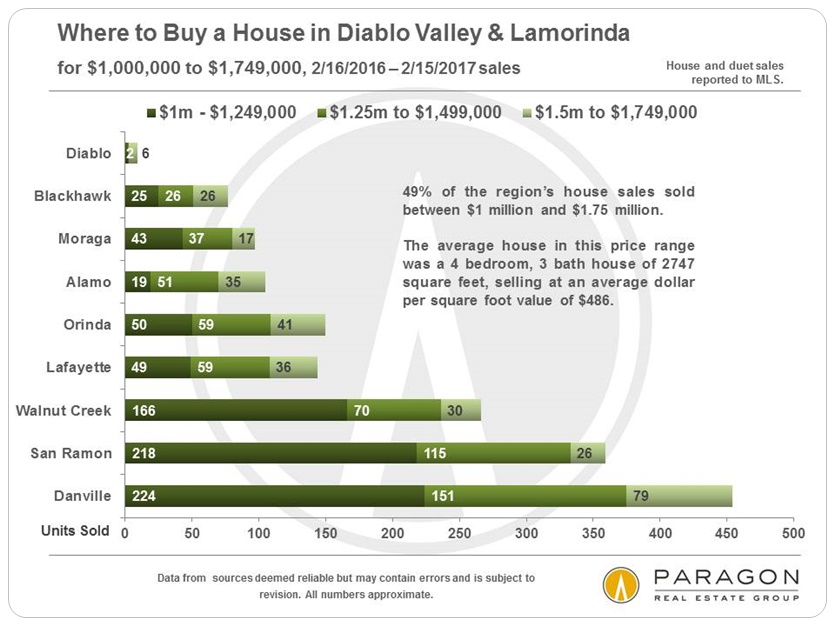 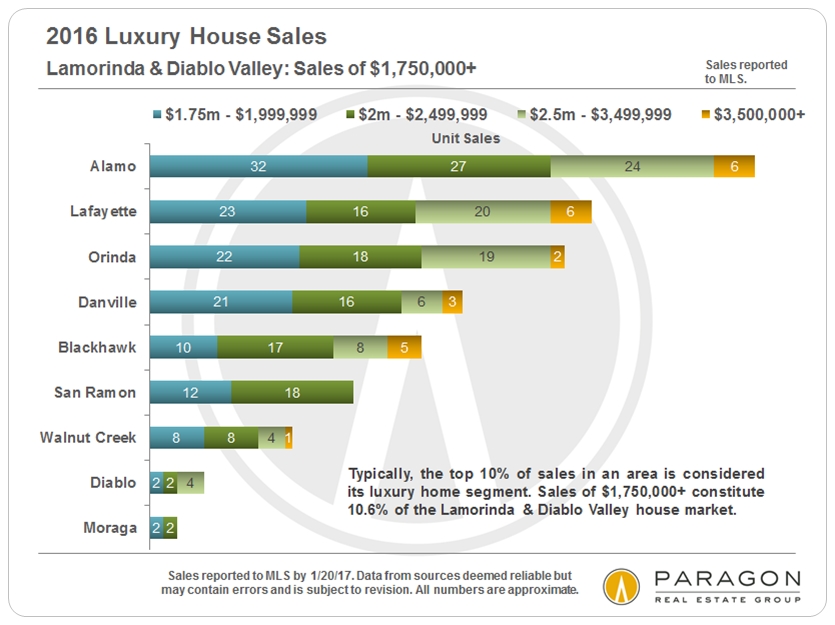 Market Summary January and February constitute the slowest sales months of the year and are subject to significant seasonal issues – many of their sales went into contract in December – so coming to definitive conclusions about where the market is heading based on their data is difficult. However, for what it is worth, comparing the 2-month period to the same period a year ago, the median house sales price in the area remained basically the same at approximately $1,060,000. General inventory levels remain quite low when compared to demand, except in the luxury segment where demand appears to have softened over the past year while the number of listings for sale has ticked up. This chart below reflects the latest Case-Shiller Home Price Index for the 5-county metro area house market, going through the end of 2016. It illustrates how in 2016, more affordably-priced houses continued to appreciate significantly, while the most expensive segment basically flattened. Generally speaking, this is a common dynamic around the Bay Area. 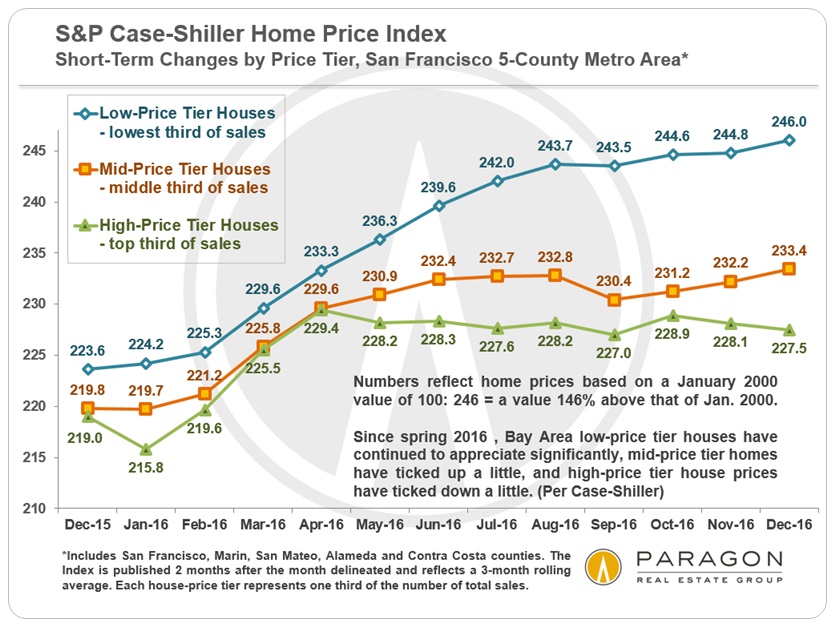 Selected Market Dynamics Snapshots For the most part, these statistical angles on conditions and trends indicate a general stabilizing in the market, 2015 to 2016, with some hints of cooling from the considerable heat of recent years. Most of the following charts show the changes in the market as the recovery began in 2012 and through to 2016. New Listings Begin Pouring onto the Market Again The period from March through June is usually the most active selling season of the year in Diablo Valley & Lamorinda, and we will soon have more conclusive indications of where the 2017 market is headed. This next chart illustrates the dramatic surge of new inventory that starts in mid-January and fuels sales during this period. 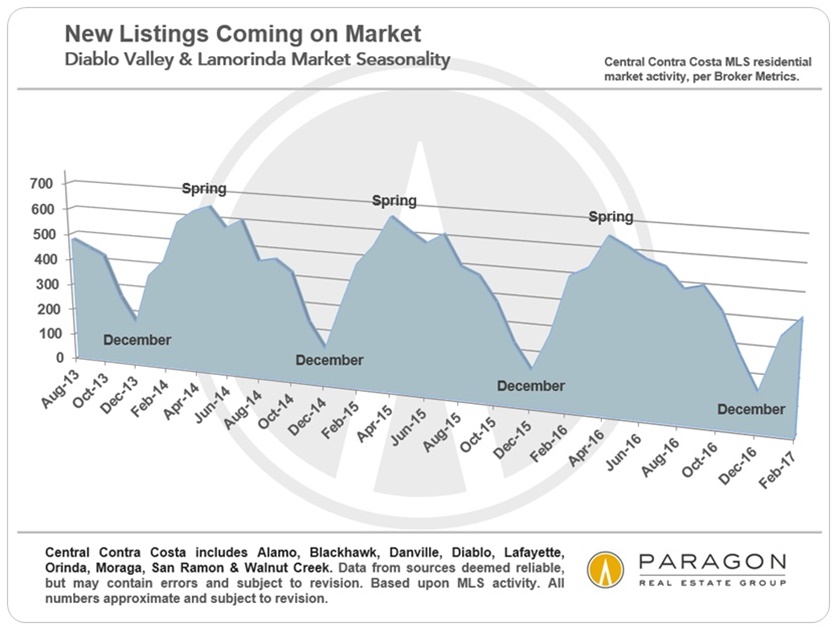 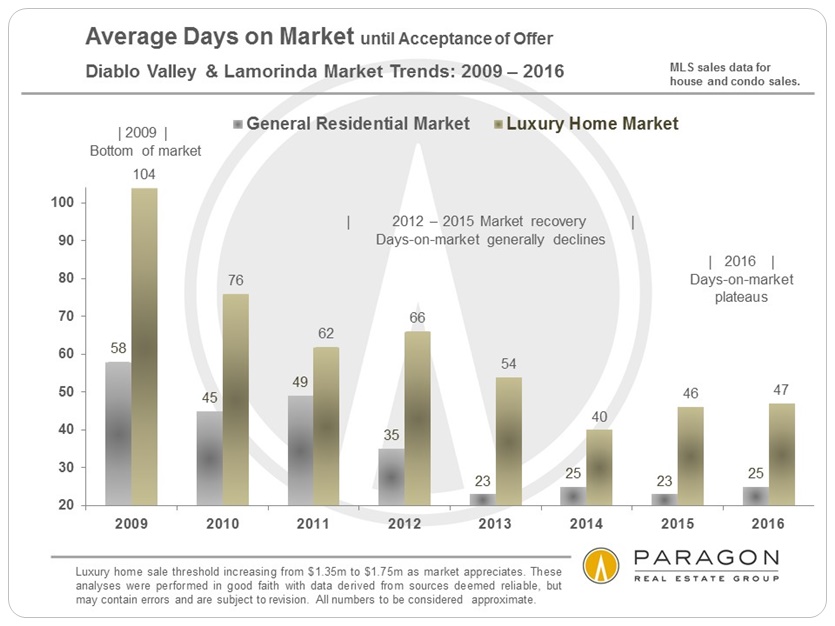 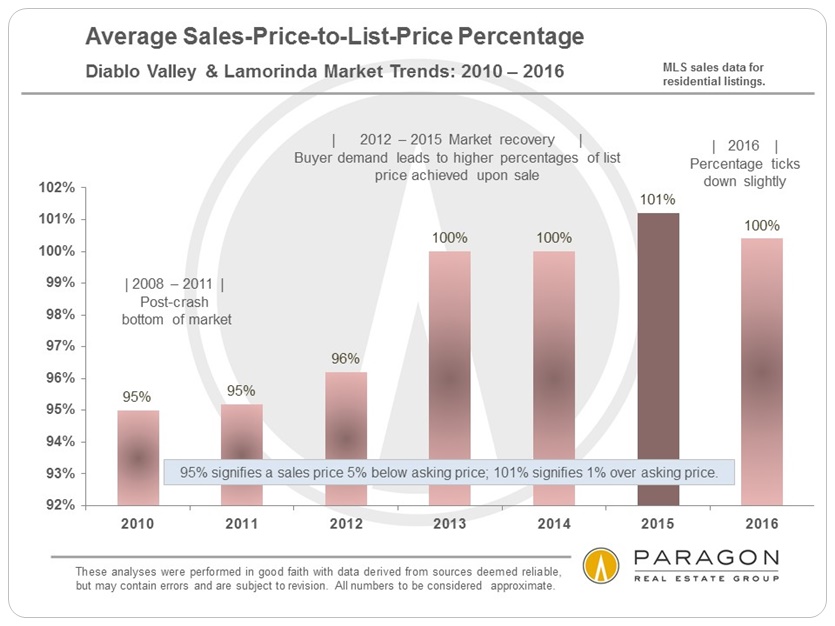 Months Supply of Inventory As also seen in other markets, there appears to be some divergence in supply and demand dynamics between more affordable price segments and the most expensive home segment, the first remaining quite hot, and the latter seeing some softening. 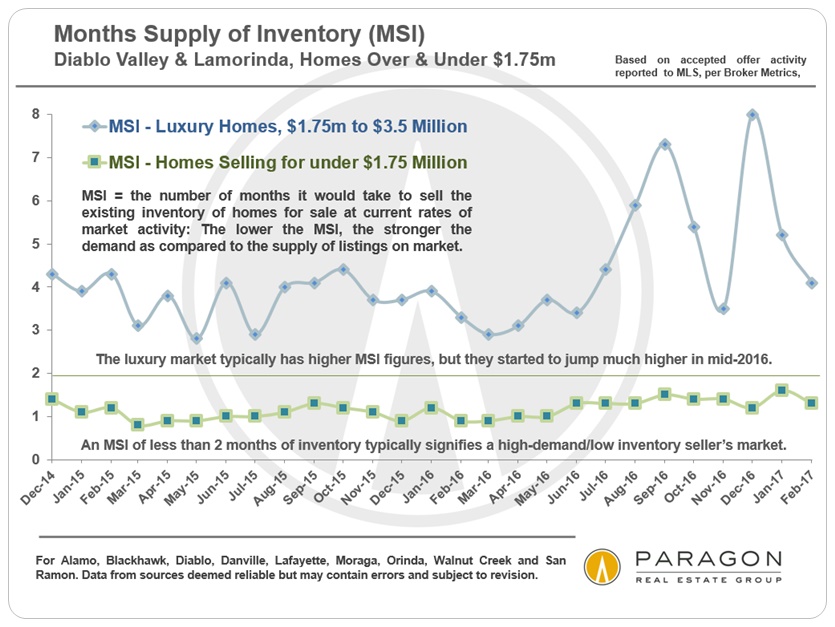 Listings Expiring or Withdrawn (No Sale) A significant increase in listings expiring or being withdrawn without selling can signal a growing disconnect between what sellers believe their properties are worth and that price buyers are willing to pay. Though there was an increase in 2016 in these no-sale listings, the number still compares well with previous years when the market was quite strong. It will be a statistic to watch as the new year develops. 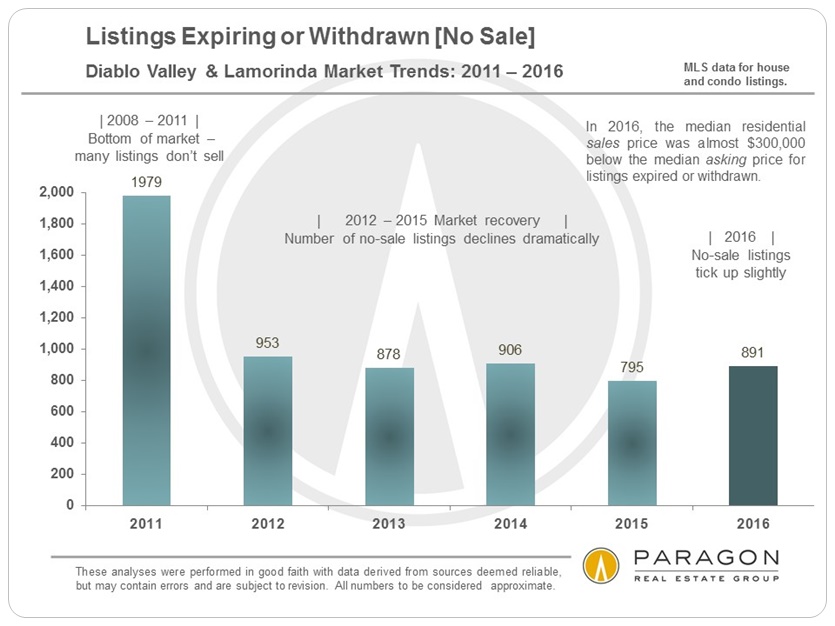 Unit Sales Volume Drops in sales volumes can occur for totally different reasons: A decline in demand, as occurred after the financial markets crash in 2008, or a decline in the number of listings available to purchase, or some combination of the two. This is another dynamic to keep a close eye on in 2017. However, it should be noted that as sales volume dropped in 2016, the overall median sales price increased about 5% from 2015, though, as mentioned previously, appreciation has varied by price segment. 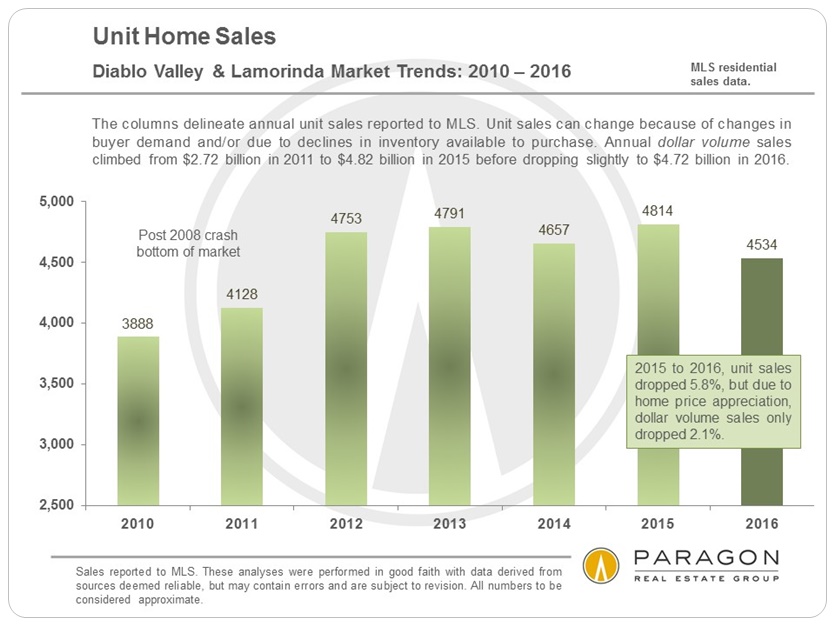 Other recent Paragon reports you might find interesting: The Diablo Valley & Lamorinda Market in 2016 A Survey of Real Estate Markets around the Bay Area Bay Area & San Francisco Home Price Maps It is impossible to know how median and average value statistics apply to any particular home without a specific comparative market analysis, which we are happy to provide upon request. These analyses were made in good faith with data from sources deemed reliable, but may contain errors and are subject to revision. It is not our intent to convince you of a particular position, but to attempt to provide straightforward data and analysis, so you can make your own informed decisions. Median and average statistics are enormous generalities: There are hundreds of different markets in the Bay Area, each with its own unique dynamics. Median prices and average dollar per square foot values can be and often are affected by other factors besides changes in fair market value. Longer term trends are much more meaningful than short-term. © 2017 Paragon Real Estate Group
Back to top
Want to Explore the Current Market Activity - Browse Top Sales, Overbids, and more?